Note that any IEEE1394a devices that share a bus with IEEE1394b devices will cause the entire bus to operate at IEEE1394a speeds.

Moreover, the absolute maximum hop count is 23. This generally means that the distance between any 2 nodes on the bus should be less than 23. However, depending on other factors such as voltage and wattage, the maximum hop count may be as low as 9.

The maximum number of cameras that can be used to stream images continuously is also limited by the number of DMA contexts supported by the 1394 chipset. This is mentioned below under “Host Adapters”.

The failure modes for daisy chained cameras are different as compared to cameras set up in a star configuration. For example, if the first camera in a line of multiple daisy-chained cameras fails, then all subsequent connected cameras will fail too. However, in a star topology, the rest of the cameras will not be affected.

Data throughput
Using pixel formats that contain fewer bits per pixel may allow the camera to achieve higher frame rates and/or resolutions while maximizing the number of cameras on each IEEE1394 bus. For example, MONO8 or RAW8 data only uses 8 bits/pixel, while RGB8 data uses 24bits/pixel. Keep in mind that the faster a camera runs, the more power it will usually consume.

Power
Hubs can help to provide additional power over the Firewire cable to connected cameras. Point Grey 3-port and 5-port hubs are able to output 1A per port at 12V using the supplied external power supply.

Cable clutter
Hubs can help to reduce the number of cables arriving at the host PC by consolidating connections. For example, a 5-port hub is able to have up to 4 incoming connections which then can be reduced to a single cable to the host adapter on the PC. Note that the total amount of data that can be transferred is still limited by the IEEE1394 bus.

Length
The maximum length of cable allowed by the IEEE1394 specification is 4.5m. However, Point Grey has 10m IEEE1394b cables that have been tested to work with Point Grey cameras.

FIFO buffers
The number of FIFO buffers varies between chipsets. A larger isochronous FIFO buffer reduces the chance of image corruption due to a slow PCI bus.

Interface
Depending on the type on interface, the maximum bandwidth of the host adapter varies greatly.

It is highly recommended to use a host adapter with a PCI Express interface to minimize the possibility of image corruption.

Dedicated bandwidth
One advantage of PCI Express is that the overall bandwidth is not shared. Each lane is guaranteed to have a dedicated bandwidth of 250MB/s per lane. Other bus-based interfaces such as PCI share the same parallel bus. As a result, 1394 host adapters on a PCI bus may be affected in situations where other peripherals on the PCI bus such as a network adapter takes up bandwidth that is needed for streaming images from a camera.

CPU
Using a CPU with multiple cores may accelerate image processing, at the expense of increased programming complexity.

Requiring the images to be processed or encoded into another format in real time may also have a significant impact on performance.

Memory
Each camera utilizes system memory for various functions such as internal buffers within the FlyCapture library, as well as any processing done by the end user application. For very large camera arrays, it may be advantageous to store images in their raw Bayer format (8 bits/pixel) as compared to storing the color processed RGB images (24 or 32 bits/pixel). However, this may mean that additional color processing may have to be performed at a later time.

Storage
The streaming of images to the disk subsystem can be a very resource intensive task. It is recommended that a striped RAID array be used in cases where a single hard drive is unable to sustain the required write speeds.

Besides being able to capture images, the software may also need to have the following capabilities:

All Point Grey 1394a and 1394b cameras support image acquisition synchronization.

When in free running mode, the cameras are automatically synced to within 125µs at the hardware level. Synchronization can also be achieved by triggering all cameras at the same time, either by an external trigger or by an asynchronous software trigger.

Point Grey’s Multisync software can also be used to perform automatic synchronization of cameras across buses. The software is also capable of synchronizing cameras across multiple PCs using a dedicated IEEE1394 timing bus.

This sample configuration contains 32 2.0MP Grasshoppers 1394b cameras which are synchronized and streaming 320MB/s of data into a single PC. All hardware components from the camera to the host adapter card are designed and manufactured by Point Grey. 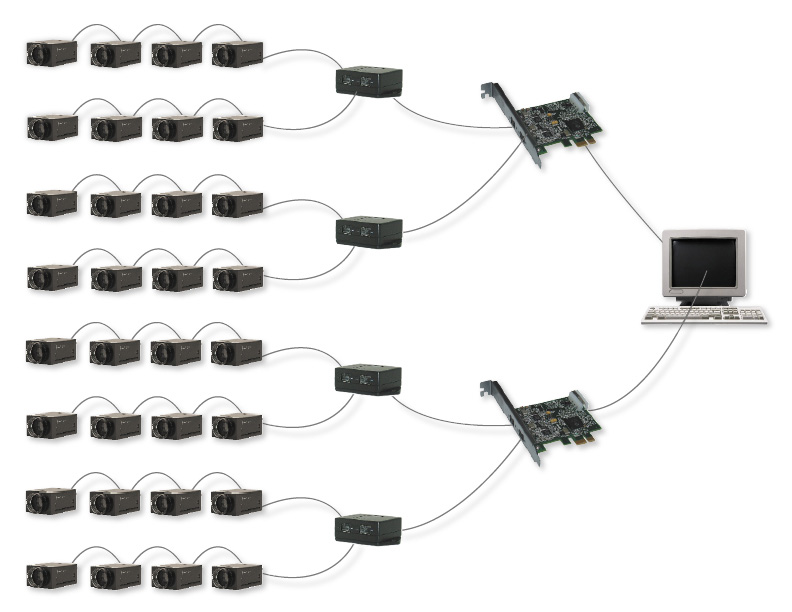 Data rate per camera
There are 8 cameras connected to each host adapter. Since each host adapter can support a maximum data rate of 80MB/s, in order to have all cameras streaming simultaneously, each camera is limited to 10MB/s of data.

Note that an 800x600 image contains a quarter of the data as compared to a 1600x1200 image. As a result, the frame rates can be quadrupled at the same pixel format.

If the frame rates are unsatisfactory, the 32MB onboard frame buffer available in the Grasshopper can be used to store images temporarily which can then be transmitted off the camera at a later point in time.

Power
The host adapter cards are unable to power all 8 cameras on each bus by themselves. As a result, the hubs are externally powered to provide additional power over the IEEE1394 cable.

This sample configuration contains 16 2.0MP Grasshoppers 1394b cameras which are synchronized and streaming 115.2MB/s of data into a single economically priced laptop. Data rate per camera
There are 8 cameras connected to each host adapter on the dual host card. Since each host adapter can support a maximum data rate of 80MB/s, in order to have all cameras streaming simultaneously, each camera is limited to 10MB/s of data.

Battery life
It is highly recommended that the laptop be powered externally. With the amount of CPU utilization present, it is likely that the internal battery will only function for a short period of time.

System memory
Large amounts of RAM may be required to store the images in memory. This is especially true in laptops, which often have less memory as compared to desktop PCs.

Power
The host adapter cards are unable to power all 8 cameras on each bus by themselves. As a result, the hubs are externally powered to provide additional power over the IEEE1394 cable.